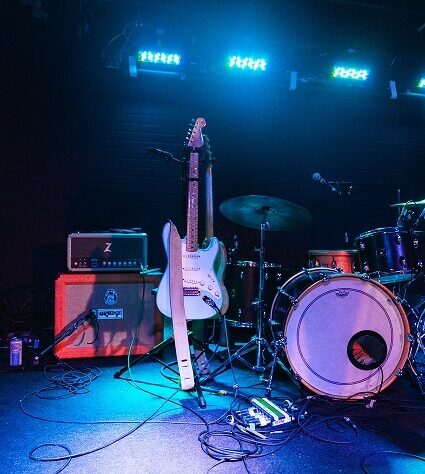 Fender American Professional Telecaster Deluxe Shawbucker
The best guitar for playing punk
It is both excellent for learning the ropes of Punk guitar and for getting the best tone when playing it.
Read Verified Customer Reviews

When it comes to punk, it would seem hypocritical to reject any guitar-based on low popularity. The essence of punk constitutes that any guitar can punk. But if you are detail-oriented and want to know what aspects of the music your guitar will impact the most, this is for you.

END_OF_DOCUMENT_TOKEN_TO_BE_REPLACED

Surprisingly many people welcome the Stratocaster into the punk rock guitar family. Throughout the years, it has mainly been shown in the light as a pop/blues guitar. The Stratocaster fits punk because one of the powers of punk is breaking the standard.

The basic layout for a Stratocaster is the same for the Shawbucker. The neck and middle positions have one V-mod single-coil pickup each. In the bridge position sits a humbucking (or Shawbucking) pickup. Forever improving, the Shawbucker features a new set of pickups specifically designed to bring out the guitar’s dynamic nuances. If you play it soft, it’s going to be soft if you play it hard..

By compromising an extra single coil from the classic Stratocaster design for a humbucker, we achieve the “Fat Strat.” That humbucker will take away from the essentials of what defines typical Stratocaster sound, but it will add chunk and power!

It also has a deep C neck profile, a pop-in tremolo arm, and a rosewood fretboard, making it a worthy version to its predecessors.

Using this Stratocaster for punk-pop will undoubtedly work. Billie Joe Armstrong makes the Fernandes Stratocaster copy shine with his signature model “BJ”. Since the Stratocaster in practice is quite a thin/small sounding guitar, you will want to look at distortion pedals to boost your power chords’ power. Even though the HSS strat uses the strength of an added humbucker, you may find it lacking in the mid-range and a punch.

END_OF_DOCUMENT_TOKEN_TO_BE_REPLACED

The Junior comes with one volume, one tone control, and one single dogear P-90 pickup. To go side by side with the raw music of The Replacements, Paul Westerberg wielded a Les Paul Junior. It used to come in only one color, vintage tobacco sunburst. Now you will have a few more color options, but they are still discrete to match the guitar. The Junior has proven itself to be suitable for many genres, not only Punk Rock but also Reggae and Hard Rock. The tone and volume controls might seem too simple at first glance but are capable of controlling a wide dynamic range on their own. It has a mahogany body and neck, with a fretboard made of rosewood.

If you want to take a simple looking guitar and build a solid base for punk rock with heavy power chords and punchy riffs, Junior will be an excellent choice. If you want to use your guitar to shape an image of yourself as an explorer of the unknown, this one might not be for you.

END_OF_DOCUMENT_TOKEN_TO_BE_REPLACED

The Telecaster Deluxe was initially created in 1973 as a response to a request from guitarists. The request was to create a guitar that sounds like an amp about to blow up but without the hum. It developed into the traditional telecaster twang, but the DLX Shaw model brings a bit more to the table than the classic telecaster.

No matter the music style, there is no right or wrong way to set up your rig. If you utilize your amp by cranking it and boosting it further with a distortion pedal, you will be set on an excellent path to a thick and satisfying Punk Rock sound. With the pickup technology of the DLX Shaw, you will retain high-end clarity while adjusting your volume. In combination with the fact that it uses the Shawbucker pickups, which help bring out the different strengths of your playing, makes the Shawbucker DLX Telecaster an excellent choice for more lead-oriented Punk guitarists. If one of your main goals is to make a melody be heard through the energetic sound-wall created by a Punk song, this is a worthy tool. Joe Strummer of The Clash used a Fender Telecaster in his music.

The Telecaster that he used has been described tonally as nothing more than a standard Mexican Tele. The DLX Shawbucker will be your capable, upgraded version of this recognized punk rock guitar, allowing the quality of even your most delicate tone voicings to be heard.

END_OF_DOCUMENT_TOKEN_TO_BE_REPLACED

The SG Special will resonate with the classic, thick tone that is so iconic to the Gibson Les Paul. A red Gibson SG Special image is not soon to leave your mind and is often associated with rock’n’roll. Many players agree that the SG Special has a playability perk. Riffing, changing chords and soloing will flow easily.

The neck made of Mahogany which promotes a full sound, fretboard made of Rosewood. Two P-90 Dog Ear pickups in bridge and neck position, which also help to give a boost to the midrange fullness. Controlling the pickups and volume, you will have access to 2 volume, 2 tone knobs, and a toggle switch.

The already listed guitars will most likely be over-budget for your average punk. The first guitar that I used for punk was a B-stock Harley Benton of a now-forgotten model name. It wasn’t a great guitar by any means, but it was more than enough for learning play. To get to the base where you can start developing your guitar skills, you only need anything with six strings that stays in tune for a reasonable time and does not fret-buzz when playing. For punk and especially for punk, the requirements for a starter guitar are not so strict. If you have a basic distortion pedal and amp, you can make anything sing (or scream). To showcase this, the following list will contain cheaper equivalents to the previous list.

END_OF_DOCUMENT_TOKEN_TO_BE_REPLACED

This guitar is a close resemblance to a cheaper version of the Fender Shawbucker HSS strat. In 1965 Squier was acquired by Fender. Since then, Fender has been producing more affordable versions of its iconic guitars. Countless manufacturers are making Fender copies. If you are looking for something as close to the original Fender Strat as possible, the Squier is your choice. The main difference will be the quality of the material that goes into the guitars.

The Squier Contemporary Strat features two Ceramic Single coil pickups and one Ceramic Humbucker, with one knob for volume and one for tone. It uses different wood than the Shawbucker HSS Strat. The Squiers will not resonate in the same way as the Fenders. These pickups are more affordable to manufacture, but they still provide a satisfying level of clear and crisp tones via Single coils and warm tones from the humbucker. Since the Squier sounds so similar to the Fender, it is common for musicians to have a stage-backup Squier Stratocaster for their main Fender Strat. All in all, the Squier Stratocaster shares enough of the characteristics of a Fender Stratocaster to be deemed worthy for Punk Rock.

END_OF_DOCUMENT_TOKEN_TO_BE_REPLACED

The Epiphone Les Paul Special closely resembles a Gibson Les Paul Junior on many levels. It has the Vintage 50s profile. Without the additional pickups and knobs, they look very similar.

In comparison to the simplicity of the Gibson Les Paul, the Epiphone Les Paul features a different approach to tone and volume adjustment. P-90 PRO Soap Bar pickups are in neck and bridge position, along with a 3-way pickup selector, 2 volume knobs, and 2 tone knobs. The P-90 pickups featured the entire guitar produced to resemble the Gibson Les Paul Junior as closely as possible. It means that the raw and fat tone provided by the single-coil P-90 pickups is still a big part of the sound of this guitar. With the high output pickups, it will handle being distorted and gained very well. Sharing such close resemblance to the Gibson Les Paul Junior, it is without a doubt well suited for Punk.

END_OF_DOCUMENT_TOKEN_TO_BE_REPLACED

Following the same trail as Squier Stratocasters, the Squier Contemporary Telecaster is one of the best options you have when it comes to getting the sound of an original Fender Telecaster.

When you are looking for a beginner guitar in a guitar store, you should take a look where the Squiers hang. The Squier Contemporary has a C shaped neck, which makes it easy to slide across. The neck is made of maple, and the body shape is that of a standard Telecaster.

Just like the Squier Stratocaster, the pickups are ceramic and cheaper to produce. In the Squier Contemporary Tele HH, the pickups are two Single coil Humbuckers in the neck and bridge position. Due to the humbuckers nature, the guitar will be lacking in a bit of the classic Telecaster twang, but Punk does not matter as much. The humbucker pickups will yet again give a warm output to build a foundation to stack distortion and gain on.

For a beginner guitarist, you could easily replace the Fender American Professional Telecaster DLX Shaw with this Squier Tele without them being able to specify the difference. Once you have played guitar for a while and have tried different guitars, you will learn how to spot what is good or bad according to your built up preferences. The Squier Contemporary Telecaster HH is an excellent place to start loading impressions into your guitar pallet.

END_OF_DOCUMENT_TOKEN_TO_BE_REPLACED

The value for money that you get when buying an Epiphone G-400 Pro is tough to match. What sets the Epiphone apart from the Gibson SG Special is pickups, fingerboard, finish and origin. Being produced in Asia means decreasing in price, but suffer some loss of quality. They have the same neck wood, body wood, scale length, and many more details, which all together bring them very close in resemblance to each other.

Summary: Best All Round Guitar

Due to the affordability and influence, this guitar has had across time, the crown winner for best punk guitar in this list will be the Telecaster. Be it distortion or clean melodies, be it a Squier or a Fender, the Telecaster is a workhorse that conforms with what you throw at it. It is excellent for learning the ropes of punk guitar and getting the best tone when playing intricate melodies and strumming patterns. Humbucker pickups, which are featured in all listed guitars, are ideal for punk playing.

All in all, the Telecaster can be used for any type of punk, be it more towards Pop Punk or Punk Rock. When it comes to this guitar, the power is in the types of pedals, amps and used playing techniques.

Any guitar can be used to punk on, and it is all about the little details of what sound you want your instrument to produce. Many people will buy guitars based on looks, which is fine because the main question is feeling. The best thing about finding a guitar is when you find one that suits you on a personal level, and it is only up to you to decide what fits that mold.