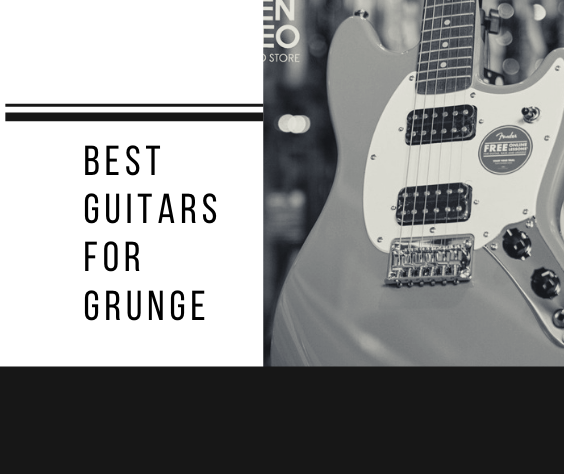 To help the heavy distorted guitar sound that grunge requires, there are some guitars that deliver better than others. Anger and outrage lie closely connected to the spirit of grunge, and grunge music is undoubtedly related to punk music. Going against the grain is both in the spirit of punk and grunge. Therefore, choosing the ”best” or ”most popular” guitar for grunge might seem contradictory. But the meaning of the music goes beyond what instruments are played, and there are some legitimate benefits when choosing one guitar over the other.

Some guitars handle the down-tuning that grunge calls for better than others. All guitars will have different starting positions when it comes to tone-shaping abilities. A lead focused player might be looking for the possibility to add more high-end clarity from their guitar output while a rhythm oriented player will want to add a mid-range chunk to boost their power chords. Several factors set guitars apart when it comes to enhancing different aspects of a grunge song, and we are going to be comparing a few different guitars.

END_OF_DOCUMENT_TOKEN_TO_BE_REPLACED

While this model might not be the go-to choice for punk and grunge musicians, it is still a viable choice for distorted sounds. The Jazzmaster was designed by name to cater to jazz musicians, but since then, it has been adapted into many different music genres. This model has been used by Elvis Costello, Thurston Moore, Lee Ranaldo, J Mascis, and many more. It features two single-coil pickups that provide high-end tone output typical to single coils.

However, the pickups on the Jazzmaster were designed to output a little bit more mid-low end than the standard fender single coils. It is because Jazz players often search for a rounder tone. In this case, the roundness of tone might be more suited for a rhythm-oriented player who wants chunky power chords. Unlike a Stratocaster, the Jazzmaster models typically have higher output signals, which means you will need less push to get it to the high volume output that grunge requires.

END_OF_DOCUMENT_TOKEN_TO_BE_REPLACED

It is certainly a formidable instrument. Stratocaster models have been used by so many punk and grunge musicians that we do not need to name their names. The guitar is verified to work with any type of music and is the most all-around choice in this list. If you are looking for a generalist grunge guitar, this might be good. The HSS strat comes at a not so grunge price, as it is quite expensive. If budget is no concern and overall value of a guitar is a concern, the HSS Strat is a fine choice.

END_OF_DOCUMENT_TOKEN_TO_BE_REPLACED

Les Paul from Gibson is known for its’ thick and chunky sound. It might be the perfect tonal output for a player seeking to boost their distorted chunky power chords. The output that signifies a Les Paul is a warm and thick one. This tone is on the same spectrum as the Fender Jazzmaster mentioned above, but the Gibson Les Paul Standard might be even more warm and thick. There are four knobs controlling volume and tone. The core sound of this guitar will provide good grounds for creating a fat distorted sound. The risk factor with this guitar is that it might be too fat and chunky for grunge music.

Having a sound that takes too much space in the mid-low range might take space from the kick drum and vocals, which are both vital for a good grunge song. It means that if you purchase a Les Paul Standard and intend to use it for grunge, there might be a portion of the guitar that you will never have a use for. But if the player is searching for an iconic guitar, with an indisputably thick tone the Les Paul Standard will deliver.

END_OF_DOCUMENT_TOKEN_TO_BE_REPLACED

It is the first guitar in this list that has a low/cheap price. For grunge and punk music alike, being cheap means adding to the very spirit of the genre. A lot of players put a focus on choosing an instrument that can be trashed without causing too much economic distress. This guitar can be trashed, in true grunge spirit.

Squier is a brand that is owned by Fender Musical Instrument. It means that the same level of expertise goes into making a Squier guitar as a Fender guitar; the difference is in the hardware used. The mustang has a simple design with cheap wood, 1 volume, and a tone knob. The tone output is boosted by two standard humbucker pickups, which provide a warm tone characteristic to humbuckers. The humbuckers give a warm and round tone, which suits both lead and rhythm guitar. The Squier Bullet Mustang will not feel like the best guitar in the world to play will not have the best sound output, but it might be the most priceworthy guitar on this list simply because of the price.

END_OF_DOCUMENT_TOKEN_TO_BE_REPLACED

The Telecaster is another guitar on this list that is totally iconic. The perks of owning a telecaster are many, and they may positively relate to grunge music. The telecaster sound has a” twang” typical to it. This twang is commonly used in genres such as blues, funk, and country music but will add an exciting element to grunge and punk due to its’ twang. This twang comes in the form of a high-end crispness and a sharp, fast attack. A distorted telecaster with tone outputs set to sharp will undoubtedly be a good choice for a lead-oriented player who really wants their guitar to stand out on its own.

The Player Telecaster is a slightly above average priced guitar, but just like the Stratocaster from Fender, purchasing a cheaper model will provide the same underlying possibilities. The Player Telecaster HH will be a step-up if you want a telecaster that is even more authentic to the true sound of a Telecaster and if you want a guitar that stays alive a little bit longer than average. The telecaster is no stranger to being used with distortion, and the single-coil pickups are easily modified to provide either extremely sharp high end or not so sharp high-end output.

There is no clear cut choice when choosing what guitar is best to create grunge songs. Throughout history, there have been so many guitars used in so many different ways that only one real conclusion can draw from this list: It is individual.

As a player, you need to know what you are looking for before you start using this list or any other list as a guiding star for what guitar to purchase. As a writer, I will split these guitars into different price categories based on how well these guitars will perform in grunge.

The clear cut winner for price and viability is the Squier by Fender Bullet Mustang. This guitar will be a perfect entry point for anybody looking to purchase their first guitar and get into grunge. A very basic layout will give the player just enough to play around with where the guitar feels creative while not being daunting to use. A player will control tone at a decent quality of output, ranging from low end to high-end pickup output. The guitar handles distortion well, having a perfectly normal output level. The humbucker pickups will ensure that the output tone is not too heavy in either the high end or low-end register. Both viable for lead, rhythm, and being smashed on stage, the Squier by Fender Bullet Mustang is a great all-round choice!

Simply because the essence of grunge is to be norm-defying, the ender Player Telecaster HH will take the second price for being the best-suited guitar overall. Seeing experimentation is always fun, and so too in grunge. If more Telecasters are used, perhaps the sound of grunge will develop in a new direction where the twang and sharp tones of the telecaster are featured more prominently. Both audiences and players are enticed by having new elements added to their music that they have never seen/heard before. If you want to take a future path, a telecaster would be a good step in that direction. If you’re going to stick to your classics, look through some of the other guitars on this list.