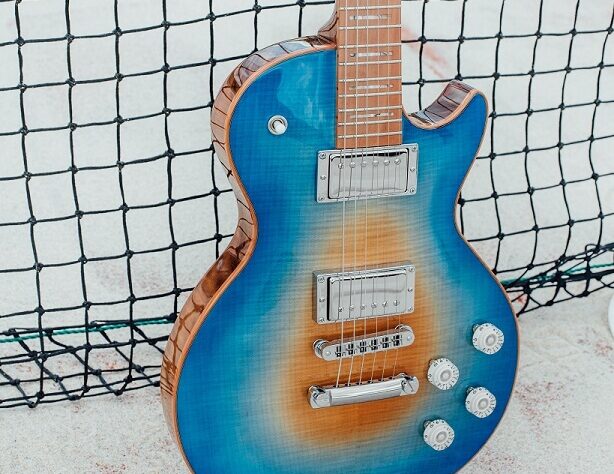 In collaboration with famous guitarist Les Paul, a guitar with the same name was created in 1952. Les Paul is a certified tool now known by name as one of the most famous guitar models in the world. Throughout its’ history, the Les Paul has mainly been used in Rock and Blues. But to create music, it suits any style that requires a thicker than average guitar tone. The original Les Paul Model from 1952 was innovated in 1958 when humbucker pickups were introduced to the guitar. The traditional Les Paul has two humbucker pickups that give the instrument the thick, noise-free sound they are famous for.

It is very likely not an economic possibility for hobby guitarists and new musicians to purchase a brand-new Gibson Les Paul. But there are plenty of options if you want to start discovering Les Paul’s sound without investing too much coin. Being a guitar model that holds the amount of respect and love that the Les Paul does means people will try to remake you. Some of these remakes are out of the necessity of copying the original guitar sound but at a cheaper cost. Other remakes might be out of the necessity of creating a slightly different sound but maintaining the core design of the original Les Paul. In this article, we will look through some of the attempts at recreating the Les Paul and see how they square up against the original.

The Epiphone Les Paul is first up. This guitar is produced by Epiphone, which is a subsidiary of Gibson Guitar. The guitar intends to recreate the sound of an original Gibson Les Paul at a cheaper cost. Just like the Gibson Les Paul standard, the Epiphone has a mahogany neck and body, rosewood fingerboard and Alnico Classic humbuckers.

An original Gibson Les Paul will overall have a higher quality of materials used in production than any of its’ Epiphone counterparts. For example, your Gibson Les Paul will always have more weight than an Epiphone, due to the amount of hardwood used in its’ production. It is said by players to add more weight to the heavy and thick tone to their instrument that a Les Paul is famous for. As previously stated, both the Epiphone and Gibson Les Pauls use similar woods for constructing their guitars. It is a good sign that Epiphone is doing all they can to replicate the sound and feel of a Gibson Les Paul. However, there are different wood qualities within the same species, and the Epiphone Les Pauls certainly get the lower quality wood.

If you are looking for a close replica to the original Gibson Les Paul at a substantially lower cost with no fluff added, this is for you.

Beating the Epiphone Les Paul Standard at price, how does the ESP LTD EC-256FM compare in sound?

The EC-256FM has a very similar look to the original Les Paul model. But apart from having the same frame, there are a lot of differences to how this guitar functions. Firstly, the 256 does not have the classic four knob setup of a Les Paul. Instead, the 256 has three knobs leaving only one knob to control tone. It means a player will be slightly less versatile when choosing how to control their two humbucker pickups’ tone output. However, the tone control knob has a switch for the coil-tap, which means you can get the sharp sound with single-coil pickups to produce with the 256.

Even though the 256 only has three knobs, you can still modify your tone more than with the classically built Epiphone Les Paul Standard. It makes the 256 an excellent and affordable choice for people looking for a more all-around guitar that is still true to a Les Paul core.

The PRS SE features a maple neck, mahogany body and rosewood fretboard. It will provide slightly different tonewoods than a standard Gibson Les Paul, but it contains pretty much the same wired hardware. Still, the two humbucker pickups are prominent. The PRS SE has a slick look and might not feel flashy to a player like the Gibson Les Paul. It takes away some of the glamour but does not lack in sound. The PRS SE is still capable of producing the classic thick Les Paul sound and has a wide spectrum of tones that a player can dial in with two tone knobs.

The most significant difference you will see here compared to a standard Les Paul model is that the PRS SE features a tremolo bridge. It will take away from the feeling of a classic Gibson Les Paul and put a player in the position to experiment more with their instrument’s sound outside of that frame. Having a tremolo bar does not have a noticeable impact on the tone of an instrument but might come in the way of keeping a steady tuning. The effect produced by using a tremolo arm is considered a novelty in a lot of music but can be an entertaining tool to use once you start learning how to control it.

Heritage is an American instruments manufacturer with close ties to Gibson. The company was founded by three employees formerly working for Gibson. Heritage grew to become a smaller manufacturer than Gibson; they produce fewer guitars but have a very loyal following. The Heritage’s standard H-150 is produced in one of the same factories in Kalamazoo, Michigan, where the original Gibson Les Paul was produced. The Heritage is pricier than a Standard Les Paul Epiphone but still cuts your cost significantly if you compare it to the classic Gibson Les Paul.

The instrument is in very close resemblance to the original Gibson Les Paul apart from details such as having a different headstock shape, tuners and some differences in tonewood. Due to putting more focus on quality rather than cutting costs and providing a Gibson Les Paul copy for as low a price as possible, the electronics in this guitar will have better quality and a longer lifespan than is featured in the cheaper Gibson Les Paul copies.

This guitar is the right choice for a player who wants something very close to a Gibson Les Paul but wants to cut costs above average.

Next on the list is a guitar in the same price range as the Epiphone Les Paul. Very affordable instruments for new or intermediate players who are not looking to commit to one instrument fully. The Vintage V100 guitar models come in many different vivid color choices and would not disappoint a player looking for a beautiful guitar.

Flamed Honeyburst, Cherry Sunburst and Gloss black to name a few. It has the double humbucker, mahogany neck and mahogany body characteristic to a Les Paul. It looks like a Les Paul and has the same dimensions as one. Suitable if you are on a budget and not too different from the Epiphone Les Paul Standard.

The guitars on this list will not be dramatically different from each other. What differs the Gretsch Guitars G5220 Electromatic Jet from the Epiphone Les Paul is not a lot. All these guitars try to emulate the standard Gibson Les Paul in one way or another. What changes with the G5220 from Gretsch Guitars are the pickups and the tone/volume controls. The two Broad’tron pickups will give your guitar the ability to maintain a tone with high definition even if you are playing with a lot of distortion. It also has a 3-position toggle switch to change between pickups, one master volume, one master tone, one volume for the neck and one for the bridge pickup.

What makes this guitar unique when it comes to controlling your sound is that the master tone knob allows the player to adjust their final output in more exquisite detail. This guitar has just like the other guitars on this list, an extreme resemblance to the original Les Paul, but is perhaps one of the more experimental and new thinking ones. The guitars on this list will not be dramatically different from each other. What differs the Gretsch Guitars G5220 Electromatic Jet from the Epiphone Les Paul is not a lot. All these guitars try to emulate the standard Gibson Les Paul in one way or another. What changes with the G5220 from Gretsch Guitars are the pickups and the tone/volume controls. The two Broad’tron pickups will give your guitar the ability to maintain a tone with high definition even if you are playing with a lot of distortion. It also has a 3-position toggle switch to change between pickups, one master volume, one master tone, one volume for the neck and one for the bridge pickup.

To get a fair view of the Les Paul Special II, it will be compared to its’ cousins that are featured in this article. The Les Paul Standard from Epiphone is in more or less direct relation to the original Les Paul from Gibson, and the Epiphone Les Paul Special is of the same brand and tries to do the same job.

The Epiphone Les Paul Special is the cheapest rendition of a Les Paul in this list. It is stripped of almost everything that is not necessary to make a playable instrument. For example, you will not have the typical Les Paul pickguard, arched body top, and white bindings. It has a neck and body made out of mahogany but parallels its price, the weight of the Special II is also significantly lower than the Epiphone Les Paul. It is the absolute beginner’s choice to choose a guitar with the classic fat tone of a Les Paul.

The main thing to consider when choosing between one guitar or another in this list is what you are looking for. There are a few categories that will determine whether a player makes a choice, and we will compare them in this final part of the article to give our winner for each of a few categories.

When playing guitar, much of the players’ enjoyment will depend on how the instrument feels to play in their hand and what kind of feeling it gives to look at. The Les Paul Special II is great for any off-time hobby guitarist who is just looking for something to touch every once in a while. But even for a new player choosing the Epiphone Les Paul over the Special II might be wiser in most cases if budget allows.

We have featured some guitars that slightly deviate from the standard Les Paul frame, such as the PRS featuring a whammy bar. These little quirks are super fun and may change the sound of a player used to the core Les Paul sound to something they have never tried or heard before.