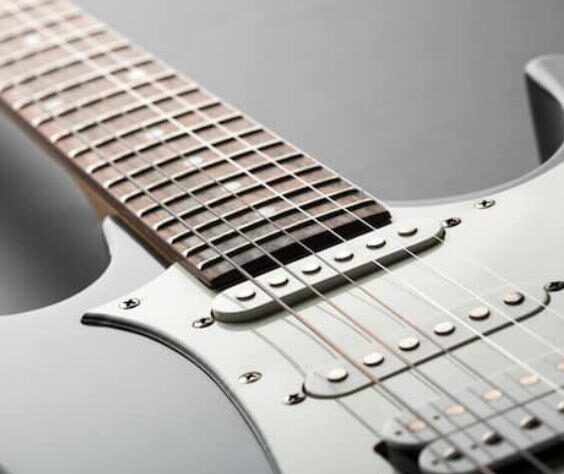 When it comes to putting strings on a Stratocaster, the most important thing to know is that most strings will work. You just have to form a clear cut picture of how you want your strings to contribute to your playing/sound before making a choice and trying a specific type. This article is meant to be a guide to help the reader pick out which criteria matter to them when buying strings. It is essential to the sound of a Stratocaster to have strings that tolerate bending without getting too detuned. It will also be important for a player to have a set of strings as a reference point before choosing strings as switching up the diameter/thickness can be very hard on the fingers.

For the player that does not know the difference between thick or thin strings in their playing, starting somewhere close to the middle is always recommended. Quality of string is important from an economic standpoint. For the player who loves their instrument but does not play very often, it might be worth investing in strings made to last for a long time. Most coated strings will tolerate the tare of time better than uncoated ones. Finding the right strings is a very individual journey. But from one player to another, it is best to try your way forward. Strings are some of the least painful purchases a musician has on their shopping list, and since they must be changed now and then it is a great opportunity to try a bunch of different types!

String gauges range from extra slinky (8-38) to not even slinky (12-56). When comparing these two gauges, you do not need to be an experienced guitar player to tell that there is a significant difference in thickness and how the strings look/feel. Every gauge in between these extreme points will help shape an instrument’s overall feel in different ways. The Ernie Ball Super Slinky strings are some of the most popular strings from one of the most popular string manufacturers. It means that it is already acknowledged as a legitimate choice. It is a cheap set of strings and does not come with anything fancy in terms of playability or durability. The string gauge is super slinky or 9-42. Seeing as these strings are so uncharacteristic, they would be a perfect choice for a first choice. These strings will not last surprisingly long or sound surprisingly good, but they are an extremely viable choice due to their price. Being one of the largest manufacturers of strings means producing higher quality string consistently at a cheaper cost, and that is exactly what Ernie Ball is doing here.

Being super slinky means being easier on average for the hands. Finding yourself with string-traced fingers is a part of learning the guitar. It can be frustrating and painful, but an excellent way to compromise with that is to forfeit some of the ”oomph” that thicker strings provide and walk away with healthier fingers. These strings will also require less pressure to bend and fret notes with, so overall, they are easier for the player who has not yet developed a technique to learn.

Stevie Ray Vaughan famously used very thick strings. The genre and the attitude that he presented through it with his guitar were very up in the listeners’ faces. His guitar stood out on its’ own and had a satisfying mid-low end register punch to carry the tone. It is exactly what you lose when dropping to thinner strings. Indeed, a legitimate choice for any type of Strat suited for standard E tuning and will go hand in hand with the sharp Stratocaster.

Another pair that is super slinky. Not much more needs to be said about how different string gauges modulate an instrument’s sound/feel. What could set this set of strings apart in the question of suitability for a Fender Stratocaster is that they are made by the same manufacturer that produces the original Stratocaster.

They are specifically produced to compliment genres where the sound of the guitar is supposed to cut through. Cutting through is exactly what a Strat wants to do. They are cheap, nickel-plated steel strings and are catered to a Stratocaster kind of guitar. A very, very safe bet that would be worth trying.

We are amping up the thickness a bit. Typically when a new player goes into a guitar store and wants to buy their first set of strings, they are recommended either slinky or super slinky strings. D’Addario produce strings that are slightly more expensive than average. This bump in price comes with increased durability with these High-carbon steel core strings. Choosing between strings is often black and white in a very practical way.

This article’s strings are mainly designed to be played in standard E tuning, which means that they experience similar amounts of pressure no matter who uses them. It means that we can without a shred of doubt say that one pair of strings will last longer than another, and this durability increases as price and quality of material increases.

If you want strings that use slightly higher quality material to last you slightly longer and sound slightly better, these are an excellent choice. They are designed to have a higher frequency response between 2-5 kHz, enhancing the crunch and bite of a Stratocaster.

Same gauge as the previously mentioned Ernie Ball Super Slinkys. The difference here is Cobalt. Cobalt is supposed to give a wider frequency response, have a higher output, and naturally reject dust and dirt from gathering on the strings. These factors make it a more all-round variant of the Nickel Super Slinkies, and in the same way, a very viable option for a Stratocaster.

The first set of coated strings. Now coating can be a perk, but also a burden. If you find yourself plowing through sets of strings by bending and playing very intense, the coating will generally lose some of its’ purpose. When it comes to a coated string, you are playing for the string’s ability to last longer on its own and to sustain a tone. This string is certainly suited for any Stratocaster but arguably suited better for the more gentle music genres like Jazz, RnB, etc.

Every genre of music gear has its’ meat and potatoes. Something everybody has seen. This is it for electric guitar strings. These strings are not perfect for anything, but they are suitable for most things. If we stick within the range of standard E tuning, they can suit almost any electric guitar. They are cheap, iconic, and an awesome set of backup strings for an experienced player or the first set for a new player. Since it is an all-around string, it functions for the Stratocaster, which is an all-around instrument.

Just like the previous Fender Strings, these are modified to boost the genres of music that Fender instruments are most commonly known to contribute to. Good to go for any style of music that requires a distinct and articulate tone. They share the same tone-shaping abilities as the 250L Light but are in a different gauge. The difference between the sound of these two sets would be hard to tell for a listener. But for the player, there is quite a big difference just between these two gauges—nevertheless, average thickness and a perfect option to put on a Stratocaster.

To compare the differences between some of these strings sets, we would have to go to an individual and almost microscopic level. The differences in price and tone output in these strings are on a minimal surface level. Ultimately what matters when choosing strings is the feeling that they give when played. This is where the core difference sits. We are crowning one winner of this string-battle because it is such a good all-round choice for a Stratocaster. Whatever skill level you are at, this string is tailored to enhance the feeling of a Stratocaster.

The Fender Super 250 takes the price for all categories. The main categories considered are price, durability, and the strings’ viability in combination with a Stratocaster. These strings are cheap, catered towards Stratocaster sounds, and will last a fair amount of time. They are all you need to begin testing a different variety of strings to shape a picture of what feels good to play. If you have already experienced these strings and the variety of strings that sit around the same quality of output, try the upgrades! Get some with coating, some with Cobalt, and some really fancy ones that you will probably never open. Just don’t get lost in the swamp!