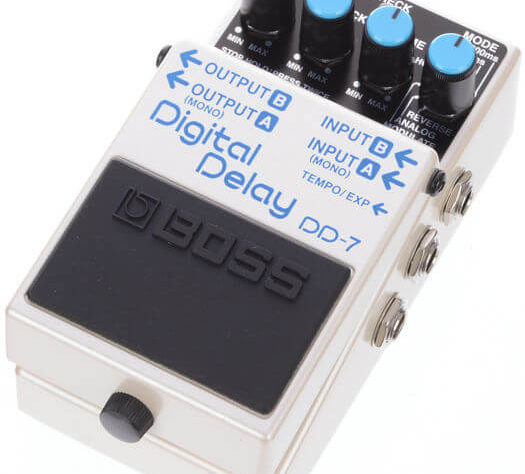 The new BOSS DD-7 pedal took the best features from its predecessor and expanded its creative potential with the Modulation Delay. The Analog Delay mode models it, the options for connecting an external control pedal, increased delay time, and other properties.

Delay time on the BOSS DD-7 Digital Delay is increased to 6.4 seconds, and this difference from the predecessor attracts attention. Also, Hold style allows you to record up to 40 seconds of an input signal, for performance with overlay. The DD-7 is also equipped with two new innovative delay modes. Modulation Delay gives chorus-like sounds. Analog Delay offers a simulation of the classic BOSS DM2, which everyone loves for the characteristic warmth.

To control the BOSS DD-7 Digital Delay without hands, you can use an external footswitch and a level pedal (sold separately). Tap Tempo can be controlled by an external footswitch, while the delay time, feedback, and effect level can be changed during the play through the level pedal. Now you can also create incredible effects with a stereo output on the BOSS DD-7, such as, for example, spatial audio flights made through stereo panning. Also, you can use stereo outputs to create a separate, dry, and damp signal channel. It’s great to use on recordings and live performances. My thoughts about BOSS DD-7

I always liked the design of the BOSS company pedals – compact, reliable, high-quality, and with a large number of functions. I can even say that I consider this design of guitar pedals to be the most successful. But the sound of not all the BOSS effects and their quality suits me, and besides their advantages, I have seen in practice the shortcomings which I will discuss in detail below.

This effects pedal is one of the most popular nowadays, and many professional guitarists include it in their concert equipment. It is a logical and improved continuation of the previous models of the BOSS delay effects and took all the best from its predecessors and expanded its potential and capabilities. The pedal is made in Taiwan, but there are no complaints about the quality.

Compared to the previous model, the BOSS DD-6 did not get any specific changes. The effect is controlled by four simple knobs responsible for:

Management is quite simple, but not as convenient as, for example, in the TC Electronic RPT-1 Nova Repeater, in which the primary mode switches are placed on the working panel. But it is worth remembering that these devices are in different price categories, and not everyone can use Nova Repeater features.

The DD 7 also has a stereo input and a jack for connecting external pedals-controllers BOSS FS-5U and BOSS FS-5L for quick and easy control of the tap tempo function. Although the Tap Tempo function can be controlled without an additional controller using the pedal’s effect, the controller will be more convenient in the conditions of a live concert. It is a compartment for the battery under the power button, so the replacement can be done very quickly and without using screwdrivers. But do not forget that the delay’s effects consume significantly more energy than any other guitar effects and the battery charge is hardly enough for a concert. It would be more logical to use a stabilized power supply, which will relieve you from the constant need to monitor the state of the battery and network interference and noise. The power button is made in very high quality, and in my practice, I have not seen the power button BOSS fail.

On the control panel, all the pedal operation modes are described in details. Even if you have never held such gadgets in your hands, you can quickly figure out the settings. To turn on the tap tempo function without a controller, you need to keep the pedal for 2 seconds and, when the power indicator changes color, tap the song tempo with your foot. It is not always convenient in a concert, and it is better to use an additional controller.

BOSS DD-7 has a stereo output, and you can get a beautiful stereo sound when connected to two guitar amplifiers. This feature is especially useful in a Modulate mode, and the sound of the guitar reminds a delay with the chorus effect. I liked the Reverse style, which loses all the games played in reverse. Immediately I had remembered The Beatles album – Revolver and George Harrison’s parts recorded in this way. A Hold mode allows you to record 40 seconds of the game and is similar in capabilities to the looper effect, but still inferior to it in functions. A small loop can be recorded, which may come in handy at a concert. The remaining modes represent the usual delay for different time settings.

It should be noted that the effect does not sound bright enough, and the lack of an effect tone knob does not allow adjusting the timbre of the sound. The repetitions themselves create a spatial effect, but there is still not enough repetition clarity in some modes. I can not say that BOSS DD-7 Digital Delay is suitable for studio work. But for concerts, it fits perfectly. The requirements of the shows do not always allow to reveal all the nuances of the sound equipment. Sometimes it makes no sense to pay for more expensive equipment. For example, I have rich effects for a home game or studio and more budget devices for concert work. I also noticed that the pedal’s active bypass is a bit, and in case of bad switching wires, it is possible that it eats up more to the top of the guitar signal with the effect turned off. For concert work, it is not always crucial, but for the studio will not work. Especially if the pedal is turned on in a successive loop of the guitar amplifier, and you lose frequencies. When I’ve tested the devices, I used a high-quality Klotz La Grange wires. There was a slight loss of high frequencies. Someone calmly notes this moment and, perhaps, when you have several solutions, it will not be a critical moment. But when you have a big pedalboard and DD-7 completing the circuit, there is little left from the original guitar signal. Also, a loss of the instrument’s frequencies cannot be compensated.

The rest of the effect is quite high quality and, for a relatively small price, includes a wide range of functions that replace the presence of its shortcomings. It is excellent for concert work, always produces high-quality sound. It can also be a unique first effect for the guitarist and will allow you to learn how to control all the functions and sound settings in the future. I can not say whether you will use all its features and modes. However, it is always convenient when they are present in your equipment and, perhaps, they will be used in the future.