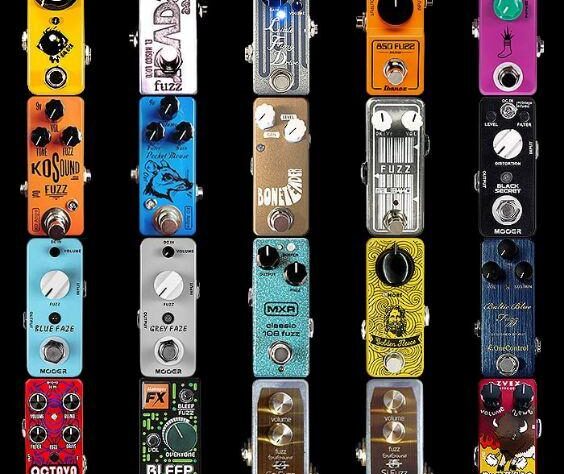 Overfeeding a tube amp with power will cause the output signal to clip and distort. Some players will resort to this method and look past all types of pedals for creating their distortion. Some players who might not want to push the volume quite as loud will use stompbox effects pedals to create this overdrive instead. There are many types of stompboxes with differing prices, sizes and looks. The main factor we will be zooming in on in this article is the size. Things and how much space the things take up is of vital concern for a musician. With the quality of pedals that we have today, a viable solution is to go for the mini versions of your desired stompbox.

Technology has developed so that a sufficient amount of punch is packed in a smaller packet. This smaller packet will come with a slight bump in price and rarely operate on battery power alone. Overdrive pedals can be used on any instrument, but this article will look at pedals from the perspective of an electric guitar and a bass guitar. The mini pedals might be harder to see, but once you turn a mini overdrive on, it will be hard to tell the difference.

END_OF_DOCUMENT_TOKEN_TO_BE_REPLACED 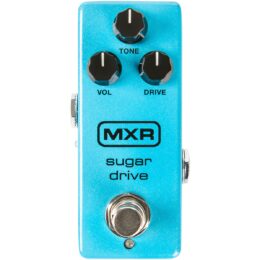 A slick little blue box is coming from old friend MXR, at an above-average price. For the sound it creates, it is, however, both performance and price competitive. This pedal has a very basic setup, with a circuit built to cater to the smaller size.

Three knobs control your usual drive, tone and volume. You may find it accentuating the mid-range a bit more than other overdrives if you play on the Sugar Drive. It will be a slight boost to the player that walks hand in hand with tweed. But the added midrange is not always positive, the tone output will be ever so slightly thicker and might come in the way in a long chain of effects pedals.

The treble or tone control has a wide range of filtration, allowing a player to switch between muffled and sharp tones by twisting a knob. It packs a lot of power, sounds and looks good. Overall, an extremely viable option for a mini stompbox that sounds tougher than it seems.

Blue is the choice of color so far. The Dumbler has not proven its’ popularity in the same degree as the Sugar Drive, but it has the same core functions. It has four knobs, controlling your standard stuff. The additional fourth knob controls “voice” with which you can add extra crispiness and color to a sound. For about the price of five Analog Dumblers, you will get one Sugar Drive. That is to say, that this is an excellent first overdrive choice because you get pretty much the same control over sound as in any other overdrive pedal.

The Dumbler is undoubtedly produced with lesser materials, resulting in a smaller circuit and a lower quality pedal overall. But this is exactly what a pedal that is trying to sell quantity over quality should be doing. Excellent beginner’s choice and lots of sound-shaping options to play around with!

END_OF_DOCUMENT_TOKEN_TO_BE_REPLACED 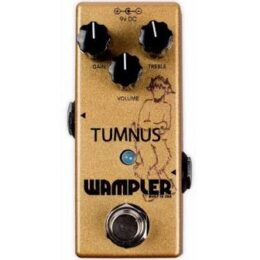 For a lot of people, the holy of holiest distortion pedals is the Klon. Much like the case with iconic instrument models, people get inspired to create a similar product.

The Wampler Tumnus is said to have similar capabilities to the original Klon Centaur from KTR.

So far, it is the priciest pedal on the list, but that might be for a good reason. The Wampler Tumnus has a bigger brother from the same manufacturer. The difference between the bigger version of the Tumnus and the smaller one is the ability to control the tonal output. On the Wampler Tumnus, we find three knobs that control gain, volume and treble. On the bigger Deluxe Overdrive V2 we can control bass, mids and treble with one knob each.

Other than that and design, the two pedals function is the same. Both are capable of creating a dynamically tailored distortion, whether you want to add a layer of distortion to your already distorted amp or want to use the pedal as a standalone distortion unit.

END_OF_DOCUMENT_TOKEN_TO_BE_REPLACED 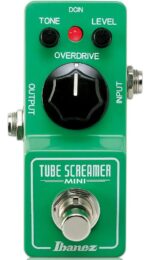 On the subject of iconic pedals, a Tube Screamer from Ibanez! This one is small!

By shrinking the knobs and removing the option for battery power, we get the cute Tube Screamer Mini, which functions just like a normal one. The original Ibanez Tube Screamer is one of the most sold and copied effects pedals in the history of effects pedals. It will produce a mid boosted tone akin to the MXR previously viewed in this article. It makes it a fierce component for a player that is into blues and rock.

In the Tube Screamer Mini, innovation is not what the manufacturer is looking for. They are looking to reproduce the sound of an original Tube Screamer but in a more compact format. If you are comfortable with the distortion that a Tube Screamer produces and want it for yourself, this pedal is a go-to.

END_OF_DOCUMENT_TOKEN_TO_BE_REPLACED 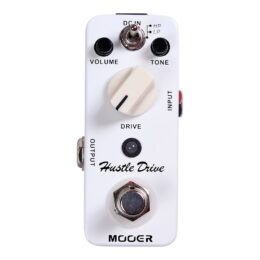 Mooer focuses mainly on manufacturing amplification and stompboxes for electric guitar. The Hustle Drive has a reasonable price, and everything needed to give a solo some distorted boost. Knobs for tone, volume, and a two-way toggle switch choose between high peak or low peak distortion. The Hustle Drive has a very low price, but it lacks slightly in quality of material and general usage as a result. It is no doubt a contender on the sound output but has two black knobs that would be quite hard to see if on stage.

Overall, not a bad option for a player on a budget.

This pedal is emulating the Fulltone OCD drive. It features three knobs and a two-way toggle, just like the previous listing. Drive, volume, and tone controls let you reach a wide dynamic range when shaping the distortion you want to put out. The toggle switch goes between high and low peaks. To clarify, the High-Peak toggle gives more low-end and distortion, while the Low-Peak toggle clarifies the sound and gives it a more natural attack. The pedals that have this option are certainly more versatile than those that don’t. Enabling the Low-Peak toggle provides a player with the ability to use the pedal and maintain the instrument’s core sound.

The Mosky Mini Overdrive is basically dirt cheap and a very hot contender for the lowest price on this list. For the player short on both cash and space, the Mosky is there to help. It features a sound carefully sculpted after the OCD Overdrive from Fulltone. The pedal is the only one on this list produced by a different company but tries to model other manufacturers’ produce closely.

END_OF_DOCUMENT_TOKEN_TO_BE_REPLACED 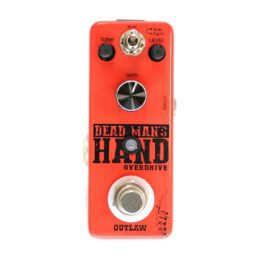 Outlaw Effects are a line of pedals specifically tailored towards both guitar and bass guitar. If you are looking for the option to switch between the two instruments and use the same pedal, this is a considerable choice. Like most mini pedals on this list, it is very affordable and takes up little to no space on a pedalboard. For a pedalboard, it is not optimal when manufacturers opt to go for all black knobs, which makes them extremely hard to see in the dark or on stage.

Such is the case with this drive, as it features three pitch-black knobs and a toggle switch. Uniquely named, the two-way toggle switch lets a player pick between ”aces” and ”eights.” Aces will drive tone towards thickness and sustain, while eights will give you warmth and scream.

END_OF_DOCUMENT_TOKEN_TO_BE_REPLACED

A very simple layout shows confidence in the quality of output. The Nano Muff has an on-switch and a volume knob. It is dynamically responsive to an instrument’s volume knob and does not produce such a one-sided sound as the layout would suggest. This pedal gains a lot of legitimacy because it is produced by EHX and moduled after the Big Muff. The public has accepted this manufacturer, and this pedal since long as very viable options for distortion stompboxes. It comes at an affordable price for a player looking for simplicity in their stompbox the Nano Muff is a go-to choice.

When starting out, it can be of great benefit to not have many options to choose from when modeling your sound. The Nano Muff can be plugged in and quickly calibrated, but still produce a wide range of distortion with varying degrees of power and clips.

We determine the quality of a pedal in many ways, such as manufacturer credibility, hardware, historical popularity and look. Taking these things and a few more into account, the most viable Mini Distortion pedal on this list is the mini Ibanez Tube Screamer. Only a few pedals beat this pedal’s bigger brother in sales, and the sound in the Mini Tube is as close as you are going to get to an original Tube Screamer with any pedal. Super cheap looks just the same but a little less intimidating and outputs the distortion that the Ibanez Tube Screamer has been recognized for since its’ inception.

The pedal with the overall best quality will be the Sugar Drive from MXR. First of all, look at this pretty thing! Secondly, it produces excellent quality overdrive and has a true bypass and enough dynamic range to make it so that players can choose whatever type of tone they want for their distortion. The added mid-range does not come in the way of anything serious and will, in almost all cases, just be something that adds a little extra punch to the distorted signal. The MXR is closely tied with the Wampler Tumnus, however. Both of these pedals sit in about the same price range, but one is a little more traditional than the other. The Tumnus is modeled after a critically acclaimed pedal and does the job very well.

The most distinct pedal on this list will get a side-prize. Because in and of itself, it is the most beginner-friendly overdrive on this list, maybe on this Earth. It has its’ own kind of unique because it is so extremely simple. One knob controls a satisfying distortion, and one of the cheapest pedals on this list. Promoting beginner-friendly products is very important as new players having fun supports the entire sphere of music. For a seasoned player, choosing an incomplex pedal may open up new doors that were not there before. It is because being restricted to only one knob makes it feel dull and uncreative, but restrictions are sometimes oddly good at promoting creativity.

Choosing overdrive means that you will have the same core functions in most cases. Players will choose what criteria matters to them the most. Are you shopping for looks, quality, price, or a mix of them all? When choosing to buy a pedal, the only thing that matters is that you are sure of why you are buying it. By the way, having no clue of what an overdrive does is also a legitimate reason to buy one.